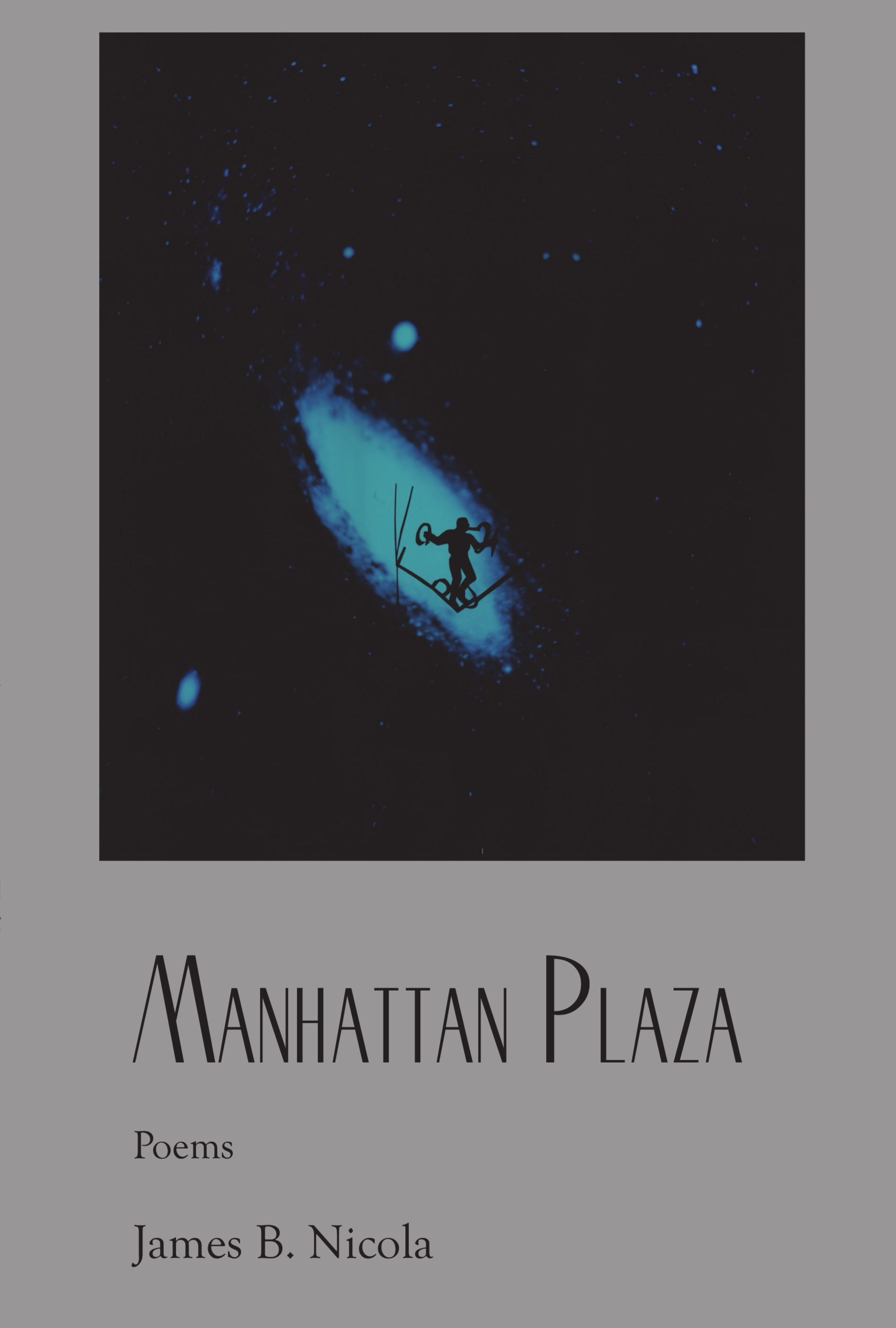 Imagine a place of unbound possibility where, around any street corner you turn at, on the other side of any door you pass through, a whole new chapter of life may suddenly begin. Friendships of a lifetime or of the moment are forged every day at sites as celebrated as Times Square and Rockefeller Center, or as innocuous as a park bench in the waning winter, a stairwell during a blackout.

Such is the lot of the people of Manhattan and of Manhattan Plaza, twin towers that rise up a stone's throw west of Broadway, which, with its residential assortment of actors, singers, musicians, authors, and other performing arts personnel, spearheaded the revitalization of the area colloquially known as Hell's Kitchen.

In these poems, James B. Nicola takes the reader on an increasingly intimate tour of his city, neighborhood, apartment building, and finally his home. Whether you are a fellow New Yorker, an occasional tourist, or an intrepid dreamer, Manhattan Plaza invites you to partake in the impressions, encounters, and adventures of a kindred soul.

Sample Poems by James B. Nicola

Manhattan Plaza is a beautifully crafted evocation of life in The Big Apple seen from the per­spective of a Manhattan skyscraper and its occupants. This varied selection is also a poign­ant trib­ute to the victims of 9/11 who are commemorated in many of the poems. Philip Fisher, London Editor, British Theatre Guide, theatre critic, book reviewer and occasional guest at Manhattan Plaza

We found James poems moving, clever, beautiful and deeply personal. Some are powerfully spare, while others are wonderfully evocative of our city as a whole; we see and feel not only our fantastic Manhattan Plaza neighborhood, but also any other place you might hang your hat. Dylan and Becky Ann Baker, actors and Manhattan Plaza residents

And things you know you suddenly dont know/except as a whistling from the wilderness, writes James B. Nicola in Manhattan Plaza. The poems in this book make a Whitmanesque mosaic of tugboats, subways, pastry shops, ghosts, Thomas Hardy, speed walking couples, Macys Turkey Day balloons and more. We trust the voice in this book which, at once, comforts and challenges us. The books grand metaphor of The City takes us on a journey of exploration where we confront our relationship to ourselves, our communities, our history, our futureeven our might have loves. But the journey is one imbued with kindness for, after all, as Nicola writes, arent we here to ease each others lives.Lois Roma-Deeley, author of High Notes (poems)

James has an extraordinary awareness of happenings in everyday life that he shares with the reader in this love letter to the Manhattan Plaza. His loose rhythm ambulates through­out, but with studious detail, and his investigative mind looks beyond the simple realities to find the why, where and how. With a sense of humor and admiration, James artistically poeticizes and marvels at everyday life at the Plaza.Anita Velez-Mitchell, award-winning poet and author

With his first collection of poetry, Manhattan Plaza, James B. Nicola joins the ranks of poets Frank OHara and Stanley Kunitz and humorist Robert Benchley as a New York author originally from Worcester, Massachusetts. James has been widely published in periodicals including The Atlanta Review, Tar River, Texas Review, Lyric, Nimrod, and Blue Unicorn stateside, and overseas in journals as exotic as The Istanbul Review and Poetry Salzburg. He also won the Dana Literary Award, a People's Choice award (from Storyteller) and a Willow Review award; was nom­inated twice for a Pushcart Prize and once for a Rhysling Award; and was featured poet at New Formalist. A Yale grad and stage director by profession, his nonfiction book Playing the Audience won a Choice award. Also a composer, lyricist, and playwright, his childrens musical Chimes: A Christ­mas Vaude­ville premiered in Fairbanks, Alaska, where Santa Claus was rumored to be in attendance on opening night.